Professional auto racing is the Rodney Dangerfield of athletic pursuits—it gets no respect. Many casual observers assume that the car is doing all the work. But behind every rubber-scuffing hot lap is a human body also being pushed to the limit. Temperatures inside the cockpit can reach 130 degrees and most race cars do not have air conditioning. Drivers can lose 5 to 10 pounds in water weight during any given race. And racers must reckon with lateral and longitudinal forces that can go from 3.00 g’s in turns (what an astronaut experiences during a rocket launch) to in excess of 5.00 g’s under braking (blackout territory for the untrained). “And that force,” says veteran IndyCar driver James Hinchcliffe, “is applied to every inch of your body.”

In the dark ages of motorsports, before cars produced such cosmic forces, a reasonably fit driver could easily handle a car’s stresses. Hell, he might even have smoked a cigarette between sessions. It wasn’t until guys like Ayrton Senna and Mark Martin came along that their peers saw the impact that fitness could have on driving performance. Now working out is a year-round grind that has drivers fortifying their core, arms, and neck.

It’s not a regimen that drivers can keep up at Planet Fitness. Instead, many frequent places like Indianapolis-based PitFit, a boutique fitness center with a client roster that includes pros like Hinchcliffe and Tony Kanaan. PitFit aims to train a driver’s body and mind at the same time through a mix of strength and endurance drills, some borrowed from more-mainstream sports and adapted to the needs of drivers.

Some teams prefer to keep driver-fitness programs in-house. Two years ago, Ganassi Racing hired former NASCAR pro Josh Wise to develop a training program for its drivers. “A lot of teams shipped their drivers out to run circuits and lift weights with their pit crews, but from an energy standpoint and even a psychological one, there’s little relevance to what they’re doing in the car,” says Wise. Here’s a look at what makes Wise’s regimen or a place like PitFit different from your local gym, with an assist from IndyCar champ Kanaan.

Strobe-Light Panel
PitFit has a custom $20,000 sensory station created by Senaptec. It takes the old numbered-tennis-ball drill—a staple in baseball training in which the trainer throws a ball at the trainee who calls the ball’s number before catching it—and digitizes it. Here, the drivers are asked to interact with moving images on a screen. Their results are measured, indicating their ability to make quick decisions under pressure.

Race Trainer
One of PitFit’s pieces of equipment is the Race Trainer, its homemade steering-resistance machine that is composed of a weighted steering wheel paired with pedals. A light-up board mounted behind the wheel prompts the driver to simulate a turn, which then instructs his trainer to pull on the resistance bands strapped to the athlete’s weighted headgear, called the Iron Neck. This mimics the effects of lateral g’s.

Strobe Glasses
PitFit uses strobe glasses from Senaptec, a company that provides tools to enhance an athlete’s mental and physical perform­ance. PitFit president Jim Leo says the glasses, which intermittently disrupt the wearer’s vision, are often used with a tennis-ball toss, so drivers can practice tracking a moving object while their field of view is compromised. 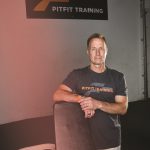 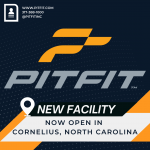 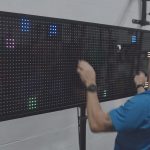 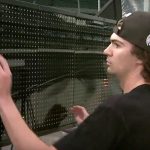